In our last asset allocation update, we framed the outlook for 2014 in the context of how bond markets deal with policy normalisation; what happens to emerging markets as a result; and whether corporate profits will meet expectations?

The first quarter has been a testing time for markets as they have grappled with the above, overlaid with an escalation in geopolitical risk, and ongoing concerns regarding the burgeoning Chinese credit bubble.

Markets took serious fright in January and February, but risk appetite has returned and investor sentiment improved.
In equities, with the exception of Japan, developed markets are now flat on the year, having been considerably weaker, whilst in emerging markets the picture is more mixed, albeit with a very significant rally in the last week.

In fixed income, core yields are now rising again although at much lower levels than the beginning of the year, and are comfortably off the lows. Credit grinds ever tighter (can we still call it high yield at a 4 % yield?), and emerging market debt like its equity counterpart, has rallied strongly in the recent period.

When we consider the macro economic backdrop, the developed world is still on an improving trend, albeit at a slightly slower pace than we had expected at the beginning of the year.

The Fed remains committed to an orderly ending of QE and expectations are now for short rates to start rising in H1 2015.

It is difficult to know the impact of policy normalisation on the economy but it will be a headwind and debt remains stubbornly high.

In Europe, deflation is rearing its ugly head and with a similar debt concern the ECB must surely be considering more imaginative policy options than hitherto. We would consider any new measures to be acting from a position of weakness. Arguably, given weak economic activity, a profoundly fragile periphery, and stubbornly low inflation, any new measures should have already been introduced.

In Japan, Abenomics appears to have stalled, and the currency has stopped depreciating. Nervous of the impact of the consumption tax, the Nikkei has fallen sharply relative to other developed markets, in contrast to last year.

Perhaps the biggest conundrum is China. Over the last few years there has been an explosion of credit, facilitated by the shadow banking system. Retail investors have been enticed into an array of savings products promising heady returns where the underlying investments are often opaque.

It is clear that the authorities are now concerned about this and investors are surely going to see an increasing number of these funds go bust.

Looking back through history at economies that experienced a similar growth in credit, it is difficult to find one that ended well. At best we are likely to see a material reduction in China’s growth rate, however it could be much worse. Clearly the prolonged underperformance in Chinese equities has discounted some of this, and valuations are low relative to other markets.

However the unwinding of the Chinese credit bubble could severely test the Chinese financial system, and unnerve investors further.

Consequently we have decided to halve our overweight in equities and move to a neutral position in cash. Equity valuations remain attractive, but they are less compelling than they were.

We increased our underweight to Asian equities on the China concerns and increase our overweight to Japan on the belief that the impact of the consumption tax will be lower than feared.

Although we remain overweight equities, it would be fair to say we are less optimistic than we have been for some time. Within fixed income, core yields are going to grind higher, and there is much less value in credit given how far spreads have tightened.

Only emerging markets look like they offer any real value. But given the China issue and geopolitical and macro risks, we are wary of increasing our weighting at present.

If there is good news, it is that the environment is likely to throw up opportunities for stock pickers which we aim to continue to exploit. 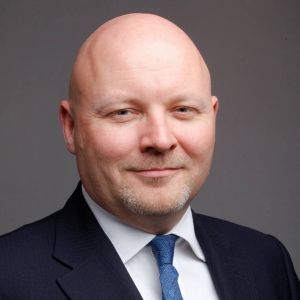 Mark Burgess is Chief Investment Officer at Threadneedle Investments. Mark joined the firm in 2010, taking over as its CIO in January 2011, and is currently responsible for continuing Threadneedle’s performance across all asset classes.