A new record has been set in the value of owner-occupier loans being refinanced, according to June figures from the ABS.

The Australian Bureau of Statistics (ABS) has released its Lending Indicators report for the month of June 2022, revealing that the value of owner-occupier housing loan commitments being refinanced between lenders rose 9.7 per cent over the month to a new record high.

A new record total of $12.7 billion of owner-occupier loans were refinanced in June 2022, nearly a quarter higher than in the same period last year.

The increase in refinances came after the Reserve Bank of Australia (RBA) had raised interest rates for the first time in over a decade.

The rising interest rate cycle, which began in May 2022 and followed by a larger bump in June, resulted in mortgage lenders passing on rate hikes to borrowers.

As such, mortgage rates began to rise from their record-low levels (brought about in the emergency settings of the early stages of the pandemic) just as property prices began to drop and inflation was rising, leading to a surge in inquiries from borrowers on refinancing and how their repayments would change.

Katherine Keenan, the head of finance and wealth, at the ABS said: “The value of owner-occupier refinancing, where the borrower changed lender, was 25 per cent higher in June compared to a year ago.

When including investor loan refinances (which actually fell 1.2 per cent over the month but was still 4.6 per cent higher than the same period a year ago), the total value of refinanced loans in June was $18.1 billion.

With the RBA having announced 50-bp rate hikes in both July and August, it is expected that refinance activity will continue to be at record highs over the next few months. 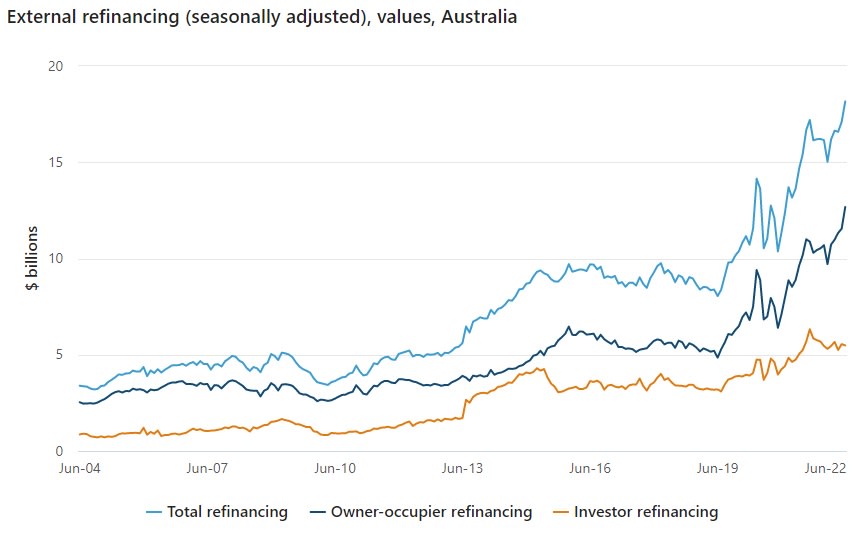 The boom in refinancing comes as new loan commitments drop.

According to the ABS, new loan commitments for housing fell 4.4 per cent in June (in seasonally adjusted terms).

However, this remained at a historically elevated level of $31.0 billion.

The drop in new mortgages was seen most markedly in Victoria, where the value of new owner-occupier loan commitments fell 7.1 per cent, after having risen by 6.1 per cent n May.

This was followed by NSW (down 2.0 per cent) and Western Australia (down 4.7 per cent).

While the ABS does not have seasonally adjusted figures for the number of mortgages written in June, it did note that the number of new loan commitments to owner-occupier first home buyers (FHBs) fell 8.0 per cent in June 2022.

Similar to the value figures, the number of these loan commitments fell across almost all states and territories, particularly Victoria (down 11.2 per cent), NSW (down 9.4 per cent) and Western Australia (down 13.8 per cent).

This represented the largest fall in the ABS Lending Indicators series, with the exception of April 2020.

Lending for travel rose 17.6 per cent but was still 6.4 per cent below the pre-pandemic level in February 2020.

[Related: Refinancing surges by 29% across east coast during FY22]

The “unusually busy” winter period saw property listings increase by 4.9 per cent on last year, the largest year-on-year increase in ...

A big four bank has distributed a further $2 million in funding to support flood victims across Australia’s east coast. ...